The ensemble is students, students in section "Uygur folk instruments". Artistic Director: Manasov the sabyrzhan Salahovic. The repertoire of the ensemble is presented as the people's works, and modern treatments of Uyghur folk songs and works of composers of Kazakhstan.

Ensemble "Dostluk" actively updates its repertoire and each year represents a separate concert program, and participates in many city and College events. In 2016 year, with the support of the Ministry of culture and sports of the Republic of Kazakhstan team took part in the national festival of ethnocultural associations of the Assembly of people of Kazakhstan “25-years of Peace and harmony”, on the 25 th anniversary of Independence of the Republic of Kazakhstan. 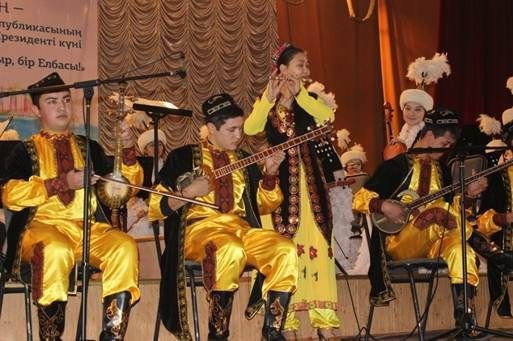 In November 2012 in the State Uigur theatre of musical Comedy named after Kuddus kuzhamyarov held an international competition of the "12 Tortures", where the Ensemble "Dostluk" presented a decent program and won.
Graduates of the section "Uighur traditional instruments" Almaty music College named after P. Tchaikovsky in addition to Uighur theatre named Kuddus kuzhamyarov, pursuing creative activities in the various ethno-cultural associations, as well as in urban and Republican cultural centers.
President of JSC "bent" and the founder of the club of patrons "Ilham", the main purpose of which is to support the creative intelligentsia, Kuziyev Dilmurat Pirmuhamedov and the Director of Almaty musical College named after P. Tchaikovsky's Birzhan hasangaliev Eskendirovich assisted in purchasing instruments and concert costumes for ensemble "Dostluk".

The following text will be sent to our editors: